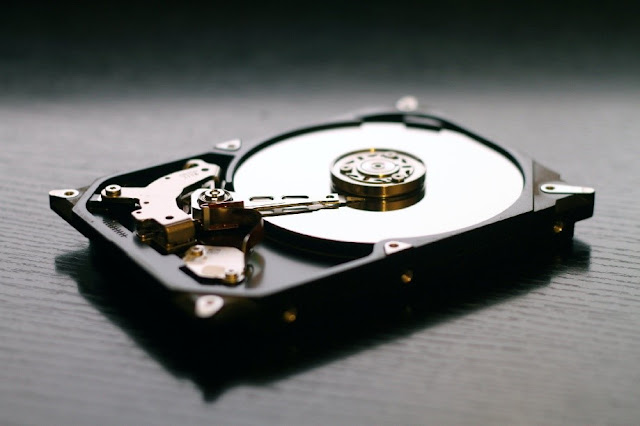 Hard Disc Drive is also known as a Hard disc. The hard disc is a tough disk that is often defined magnetic disk that has the capacity to store a large amount of data. For this purpose, it uses round and flat disks called platters that are mounted on a spindle. The platters on both sides are coated with a special material used for storing the data in the form of magnetic patterns. The Hard disc image is shown in above. All the platters are mounted on a spindle. A spindle motor is used for rotating these platters at high speed. In order to read/write the data from the disk, special electromagnetic devices called the read/write heads that are fixed to the arms are used. The hard disc image is given above. Nowadays we are using so many external hard disc drive. The external hard discs are also known as portability hard disc drives

These heads are shifted to the required position by using actuators. These are basically the various components present in a hard disk and the functioning of these components ensures that the data is stored correctly. A hard disk basically comprises tracks, sectors, and cylinders. The tracks are nothing but the concentric circles that are present on each and every platter. These tracks record the data that is stored on the disk. Each track can further be divided into small units called the sectors and all the tracks together form a cylinder. It can be shown as follows

Accessing of Data on Hard Disc

All the operations of data access will be controlled by a controller called the hard disk drive controller. The process involved in reading (or) writing the data into the disk is that the computer initially sends a signal to the disk controller saying that it wants to write something to the disk. The signal sent includes a request for a write operation and the location of the data after performing the operation.

Upon receiving a request to write operation the controller decides the position of writing by using the read/write heads. Then a buffer is used for storing and converting the data. The data is converted into Modified Frequency Modulation (MFM) format. Once the conversion is complete the controller sends it to the disk i.e., it writes the same on the disk. In order to indicate that the write operation is complete, the controller generates an interrupt saying that the operation is successfully executed. The same procedure will be used for reading the data from the disk.

A Floppy disk Drive can be defined as another medium for storing the data. In order to carry out this task it uses a disk that s encased in a plastic shell Read and write operations will be performed on the disk through the Floppy Disk Drive (or) FDD. The sizes of the floppy disks have reduced gradually from 8 inches to 5 inches to 3 1/2 inches. 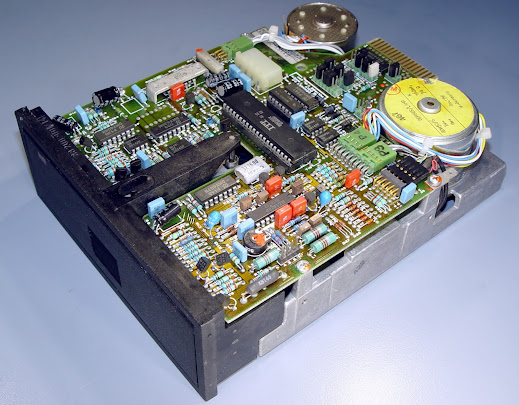 A floppy disk drive consists of certain components using which the data storage is accomplished. The picture Of Floppy Disc is shown in above. The various components are listed as follows,

These are the components that are essential to read (or) write from to the disk. They are present on both sides of the disk.

This component is nothing but the spindle motor that is responsible for rotating the disk at high speeds. The speed can be 300 (or) 360 rotations per minute.

This motor is used for bringing (or) moving the head to the required position (or) track. For this purpose, it makes a certain number of stepped revolutions.

This component is nothing but the system of levers that facilitates the user to place the disk. Once the disk is placed it opens a small protective window (or hole) on the diskette through which the read/write head can get in contact with the dual-sided diskette media. This component is provided with an external button which is when pressed the diskette can get ejected

It is the component that is essential for providing all the electronics needed for handling the read and write operations. In addition to this, it also handles the stepper-motor control circuits which helps in moving the read/write heads on each track.
The process of storing the data in a floppy disk is similar to that of a hand disk except that a floppy disk does not contain any platters whereas a hard disk contains platters.