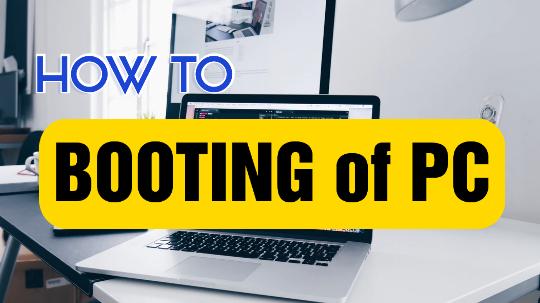 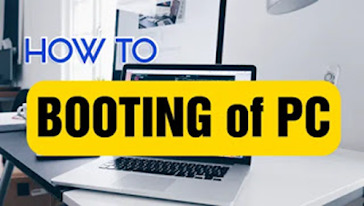 Booting in computer is defined as a region on the hard disk, floppy disk, optical disk (or) any other storage device used for storing the data. This region typically consists of the code that needs to be loaded by the firmware of the system onto the Random Access Memory (RAM). Thereby it serves the purpose of loading programs onto the storage device by utilizing the boot process of the same device.

What is the process  BOOTING In Computer?

The booting of the PC is one of the major jobs accomplished by the BIOS. The booting process involves a sequence of complex steps that include verification of configuration, checking the hardware, and loading of software. The following are the typical steps carried out during the system boot sequence.

Upon sending the system reset command by the motherboard chipset, the CPU starts its process by reading the first instruction from the jump address. The location of the jump address is fixed which is typically FFFFOh in system memory. The jump address usually stores the physical address that corresponds to the BIOS boot program across the ROM BIOSchip.

After step-2, the first instruction is executed by the CPU. This copies BiOS programs into system memory and leads to the initialization of BIOS running.

In this step, the BIOS performs the verification and testing of hardware configuration by adopting a process called the post process (Power-on SelfTest). When the POST detects any problem, the system raises the beep codes. Multiple beeps through the system indicate the nature of the problem. Also, it displays error messages, which leads to the halting of the boot process.

In this step, when the boot POST process discovers that there are no errors, then it continues the boot process. After this, BIOS is booting the PC checks for the video adapter’s BIOS so as to start. All the peripheral devices connected to the PC are virtually considered to have their own BIOS. In new generation PCs, besides producing the noises of disk drives gives only it single beep sounds which indicate that the PC is booting. After this, the video card information is displayed on the screen.

In this step, as soon as the devices present on the system start its BIOS routines, then at that moment of time the video cards BIOS first initiates to turn ON the display. This is followed by the display of information on system BIOS and other BIOS respectively.

After this, the BIOS performs a series of tests on the System. These tests determine the total amount of memory 1dentified on the system, the obtained information to the est is displayed on the screen in the form of a run-up counter showcasing the amount of memory in the system. With the introduction of the monitors, the BIOS instead of raising any beep codes started displaying the error messages for any incurred problem.

In this step, the system BIOS performs analysis in order to see whether the devices present in the CMOS configuration data function properly. This includes their speeds, access modes, and another parameter. Here each serial port and parallel ports attain their identities such as COM1, COM2, LPTI, etc. And whenever the device is passed, the BIOS displays a message that the device was found, configured, and tested.

A plug-and-play technology (PnP) is supported by BIOS. So, each time a PnP device is detected, it is configured. The information related to each and every PnP device gets displayed on the screen but it just runs on the screen quickly making it difficult for the user to read it.

This step shows the end of the test and configuration sequences. The BIOS generates a summary data screen representing the details of the PC. This indicates that the system is verified and ready for use.